After our time with Mohammad walking through the Berber village, having tea at his home, and walking to our hotel in peaceful silence, after hanging in the bar whilst the guys jammed on their instruments, the next morning we had breakfast and then took a drive in to the gorges. What a beautiful place! Peaceful and majestic. We drove to the end of the road. There are a lot of ‘end of the roads’ in Morocco but I have a feeling that these will not be end-of-roads for long. I presume there is going to be more and more tourism to Morocco and that these roads will wind further and further into the country.

Since the road ended we meandered back the same we came, which was a treat for us because we enjoyed the view! We even discovered a few little treasures like the Berber nomad’s home dug in to caves on the side of a hill. On one side they keep their sheep and on the other they sleep themselves. We spotted a small door into a hillside apparently belonging to the nomads probably to keep food or fuel or something for the sheep. I’ve posted pictures; you’ll see the perspective shot, then the zoomed-in versions. The door is difficult to spot on the perspective shot. It’s right in the middle of the shot and it is blue. I joked that Bin Laden lived there until I was reminded he’s dead. 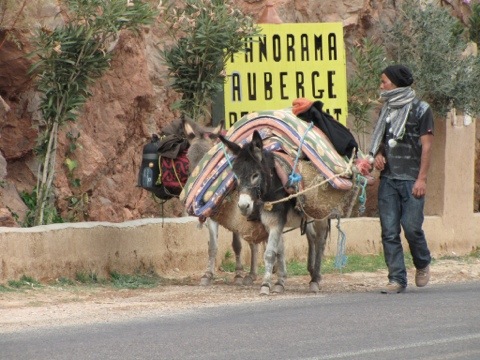 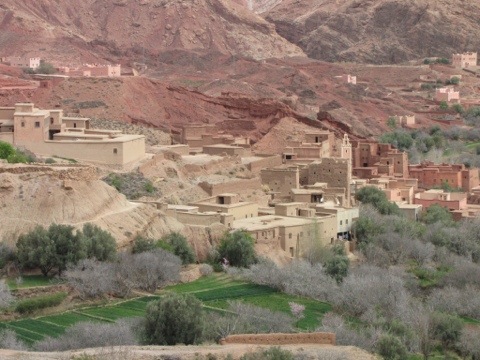 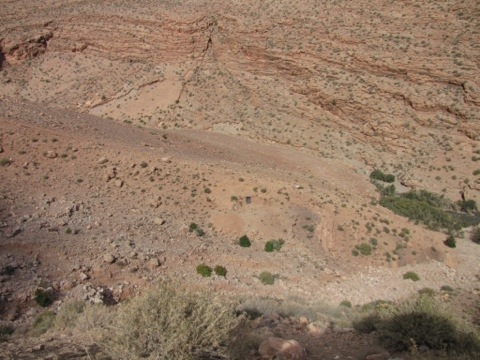 We went in to town and stopped at the market, seeing our friend Mohammad from the restaurant riding his bike along the way. Once in the market we walked around and Mokhtar purchased stuff for us for a picnic we would be having later. The funny thing about the place is that we were running in to people we know right and left! “Hi, how are you!” they’d say. And as we were ready to leave, Mohammad came with his bike for a repair. Had we known that’s where he was headed we would’ve most definitely given him a ride but instead he must’ve limped his bike all that way (3-5 miles?) to find some parts at the market. He was wearing the traditional yellow pointy-toed leather slipper shoes. Fun to see! And fun to see Mohammad because he is a delightful person with a happy face, beautiful smile, and excellent personality. 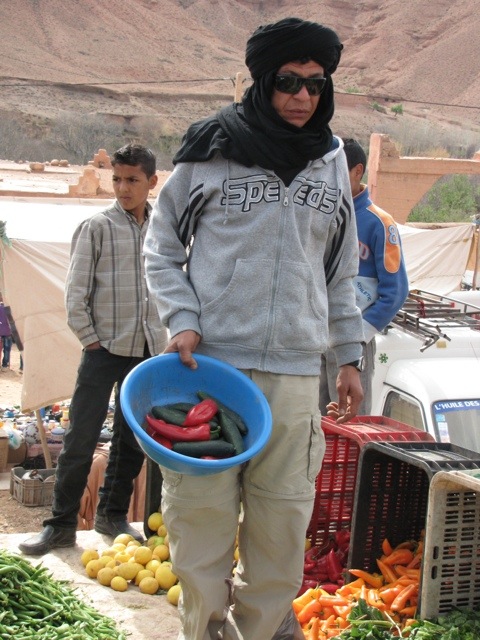 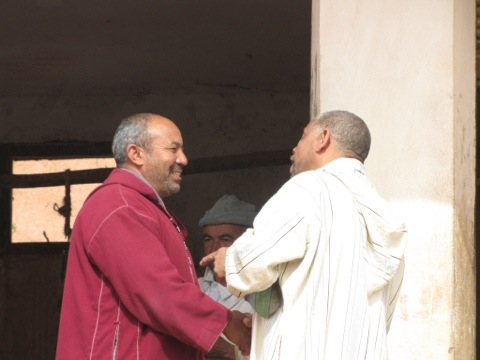 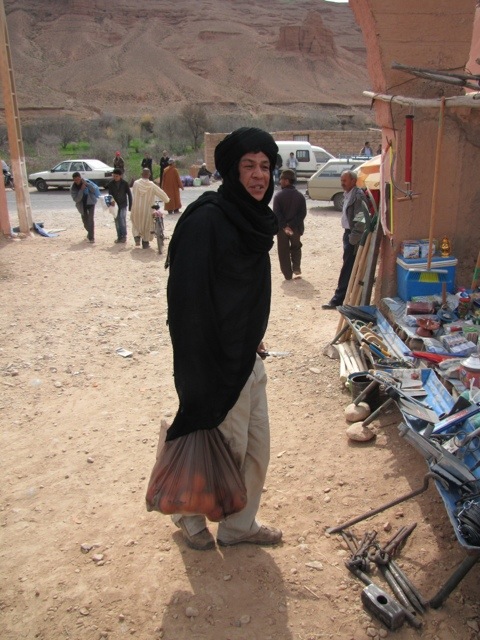 There was a beautiful village in an oasis, pronounced oh-ah-sees, so we stopped and had a picnic. Palm trees everywhere and lush green farm fields. Mokhtar led us through the village, down the stairs to the farmed land where we walked on narrow partitions between plots of land and irrigation drains. Whilst walking I thought, 'Don't forget this! This is amazing and something tourists don't get a chance to do! You are so fortunate to know these people and be able to do this!' There were many moments like that on this trip; moments where I consciously made note how lucky I am, how small the world is, and how special these experiences are. We found a spot on a dry, cracked-mud surface near where some guys were digging earth away in order for the water to fill the area for irrigating. Interesting. Mokhtar had bought bread, Laughing Cow cheese, olives (lots!), tomatoes, cucumber, pepper, onion, olive oil, hard boiled eggs, oranges, bananas – – and probably more that I can't remember, and we created the most delicious lunch! This was the first of three or four picnics we were to have. Again, this is something I will never forget and was something I'd look forward to each day.

Today was the day we saw our first camels. Granted they were on the side of the road at a picturesque spot ready for tourists to take photos, but it was still really fun and colorful. There was a guy there who seemed to be in charge. He was enigmatic and had apparently been there for some time since Carolyn, my co-traveler, had seen him before and had her picture taken with him. At one point he commented how much he loves his job, how lucky he is to have it, and how much he looks forward to it each day! It was really a fun conversation and gave me a personal perspective on his life. Very cool. There was another guy there trying to get me to buy a necklace and I kept waving him away until he straightforwardly said, “I’m just trying to show them to you. You’re under no obligation to buy one.” Well said! I loved it and at least stopped to look at them and comment on their beauty. A total sales tactic to make a tourist feel calm and relaxed, I’m sure, but it was genius! I picked up a lot of sales information along the way – – and I’ll probably do a post specifically about it. 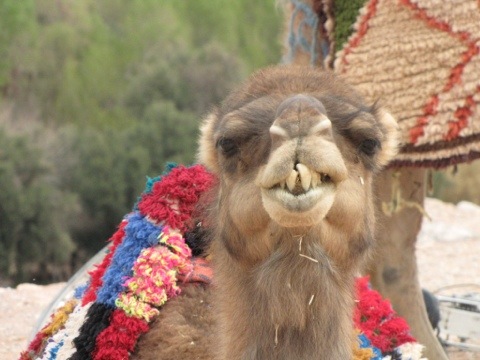 We drove through another gorge, this one more touristy and since it was a weekend, it was packed with locals, mostly young people. It was beautiful but drove me crazy what with all the tourists. Who do these tourists think they are, anyway!? I fancy myself a local everywhere I go; total denial, I know. But I'm the girl who, whilst dining in a Vietnamese restaurant frequented only by caucasians, said to my Vietnamese companion, "I don't like this place. We're the only two Vietnamese in here!" To which she said, "Yeah, and you're not even Vietnamese!" At that moment I had no idea I wasn't! Total denial. I'm not a tourist. Ha.

We drove on to a little Berber village where we stayed at a great place! The town seemed so desolate and empty and baron but it was actually really a great little place if explored further. And I never even made it in to the actual town proper, rather I stayed on the outskirts and walked in the countryside. It was peaceful, that's for sure. The weather was a bit rainy and cold so that put a damper on the experience just a little but it was still a nice little place. I'd like to go back there again, in fact. We were going to have dinner in a Berber tent, which means outside under a low roof on cushions around tables, but it was too cold.

Prior to dinner a few of us were having a beer outside and all of a sudden I saw Marianne run by, looking urgent. Turns out a guy from the British group that was there camping in RVs had a heart attack. Marianne was running to get her partner, Susan, who is a nurse, to help. Susan told the story later how she brought him to life. At the moment that he came to he looked up at Susan and his wife (who was also there) and said, "Oh f***." An ambulance came (20 minutes or longer later) and took him away with some reluctance. Apparently they were nervous about payment or maybe they thought he was going to die, or something, but they were reluctant. Anyway, we were all wondering about this guy, Richard's well being and later heard from some guy in their tour that he woke up and was swearing and trying to pull the tubes out. But the sad thing is, we ran into those British travelers later in Marrakech and they told us he never made it through the night, so that guy was lying. And then we realized that since he never regained consciousness, his last words were, 'Oh f***'.

We dined in the common room, with the hot fireplace. We sat on cushions or low stools or pillows on the floor and ate soup, bread, and tajine. The night ended with a local Berber guy playing the lotar and other local guys jamming along with him on drums. And Richard played the flute. What a room full of talent that night! This night was of a different caliber because the drummer from the hotel/restaurant kicked ass, the lotar player was out of this world and Richard was melding with the two like they were a traveling show and had been together for years! If a talent agent had been there I'm sure some agreement would've been signed to take that show on the road! And there I sat, a witness to it all, thinking how lucky I am to experience these kinds of things. I mean, local music in a small Berber village in the middle of freaking nowhere!? How much better could it possibly get? 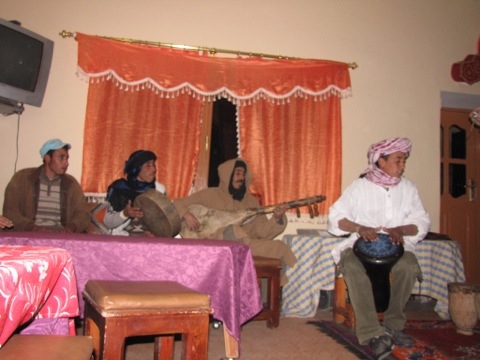 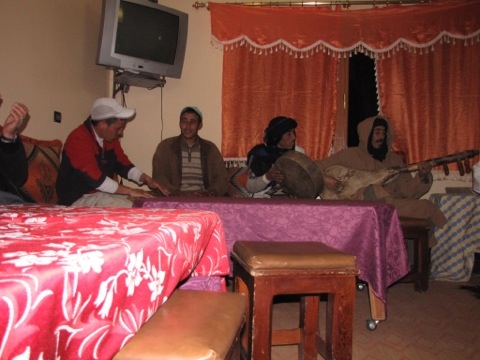