We woke up refreshed after our stay in the little Berber village – – and our night of music last night. Happy and content. It was at this auberge/hotel (camping) where the guy called Richard had a heart attack so we tried to get an update about him to no avail. As you know from a previous post, the guy died of the heart attack; never regained consciousness. We said our good-byes to the group from the United Kingdom (a happy bunch of fun people) and headed toward the Sahara. One of the UK guys told us that his trip on a camel was miserable and that his legs were so sore from it. Turns out he was so miserable that he opted to get down off the camel and walk over one hour out of the desert instead of riding. And based on what I know now, the walking is way more difficult so that shows me how much pain he was actually in.

It was a beautiful sunny day, a notably beautiful morning for me. I was happy. Very. Each day my joy grew and grew. These travel experiences invigorate me and by now I was feeling very free from thoughts about work and was fully engaged emotionally into what was happening around me. I was aware of everything I did and fully knew that what I was experiencing was life-changing and big. Each moment was important to me and I savored every bite of it.

Outside the gates of the auberge/hotel were two adorable boys. But even adorable boys can be irritating what with their constant quest for bon-bon; candy in French. One track minds, those kids. All they want is candy and I refuse to comply. Sadly, many tourists give them candy which is why they continue to ask for it. I mean, geez, candy is bad for the teeth so right there I’m not going to oblige. And secondly it’s just annoying to instill that kind of thing in these young minds. But they continued to ask and then asked the other typical questions: Where are you from? Where are you going? So I answered, ‘Minnesota, United States.’ And usually they will offer some tidbit about your state, surprisingly (usually team sports-related). Then to the question ‘where are you going’ I answered, “To the Sahara (pronounced Sa-harra) Desert.” To which the other kid finally spoke up and corrected me loudly, “Sa-haira!” So I repeated it and he nodded in agreement that I had gotten it right and repeated it in the correct pronunciation. Funny and cute. When we parted he hollered again from across the road, “Sahara!” in the correct pronunciation. Cute.

We drove back through the gorge and were able to see all of the same beauty from yesterday, luckily! That’s the benefit to always being at the end of the road – – you can go back again!

After only a short time on the road we came upon a shepherd and his camels. Beautiful dark colored camels without all the accoutrements of riding-camels or tourist-camels. As I learned earlier on the trip from Mokhtar, there are no wild camels! That dashed my dream because I romanticized the camel and thought it to roam freely in the wild like a wild animal. But really it’s like a cow. There are no wild cows, either. Never thought about that before but it’s true. So now that I think of it that way, it makes sense. Anyway, we stopped so I could take a picture of these camels and then the herder came up and showed us his newly cut and bleeding finger he had somehow wounded. Well, you have a bunch of caregiving women on board and this poor guy was suddenly surrounded by all sorts of caregiving tactics: band-aids, gauze, iodine from Achmed (the only thing that actually probably did some good!) and whatnot. Susan and I were in a race to get our aid out of our gear first and I won with a choice between a Dora band-aid, a ‘Keep Calm and Carry On’ band-aid or a regular fabric heavy-duty band-aid. I opted for the later. So after the iodine was poured over his finger (with some mild pain by the sounds he made and the look on his face) and a quick covering with the band-aid, we were off! He hardly had time, I’m sure, to figure out what had just happened, it was all flurry. We laughed about down the road thinking about it from his perspective! 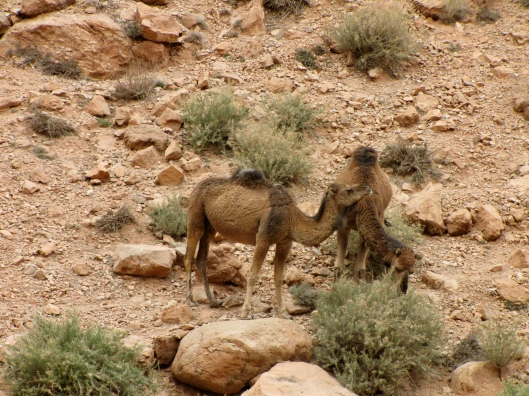 Driving down the road further we started reaching flatter, drier-looking land. The Sahara! We came upon a beautiful little spot with a sign. “Place of Relaxation.” Who doesn’t want to relax! So we stopped. 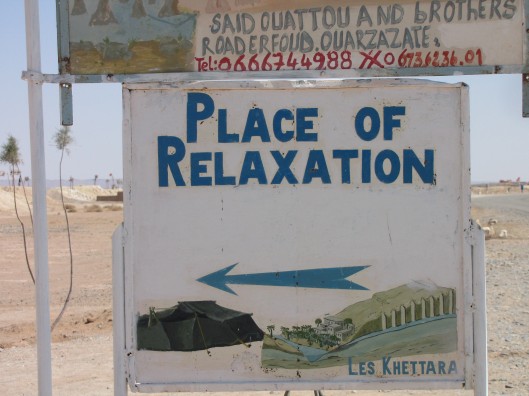 Across the street from the Berber tent of relaxation were these bamboo and plant structures that were placed there to keep the sand from blowing across the road. Wind and sand control. Here’s what they looked like. 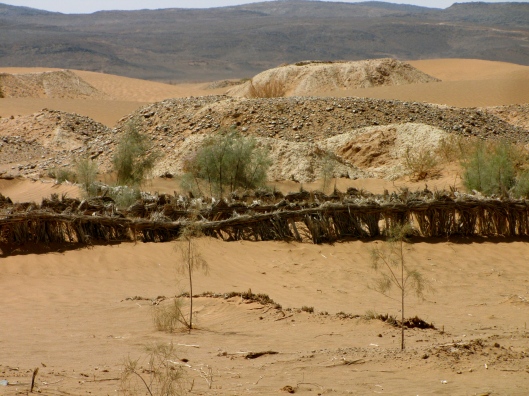 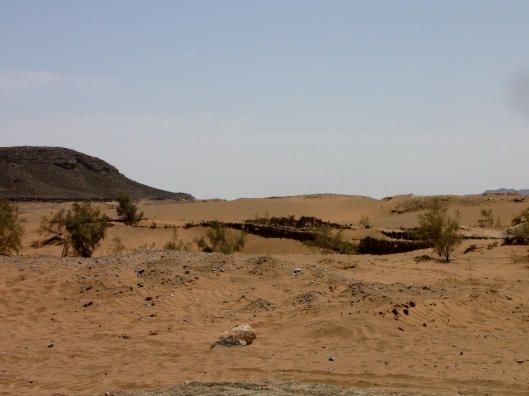 The ‘Place of Relaxation’ is also a place where the aqueducts/water system are located. The small hills in the distance were actually the old water system from the year 1200 or so! It was very interesting. We were able to walk down in to the tunnel where water must have been decades ago – – clearly no water had been through there for years and years. Dry as a bone. Interesting to see the tunnel and to imagine it rushing with water to keep families with fresh water in this remote desert area. But the best part for me was the Berber tent and the two men who entertained us there. One played a stringed instrument made from a Mobil Oil can! And the other charmed us with his smile and conversation. Turns out he was featured in 2010 in the Delta Sky Magazine on a feature about Morocco. He proudly showed us the article in a plastic sleeve; I took a photo of him with it. Quite cute! 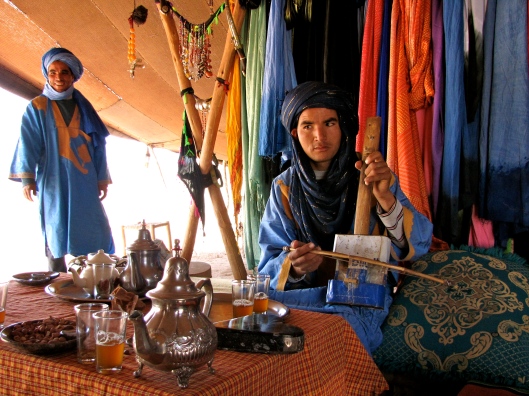 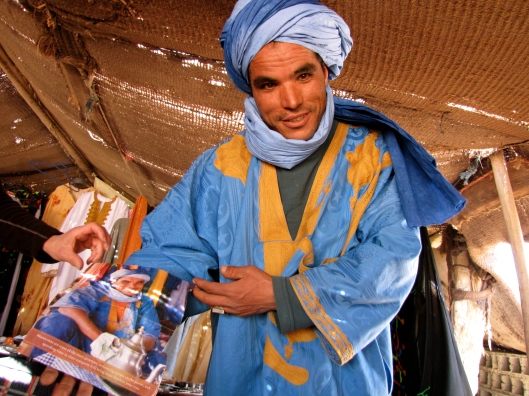 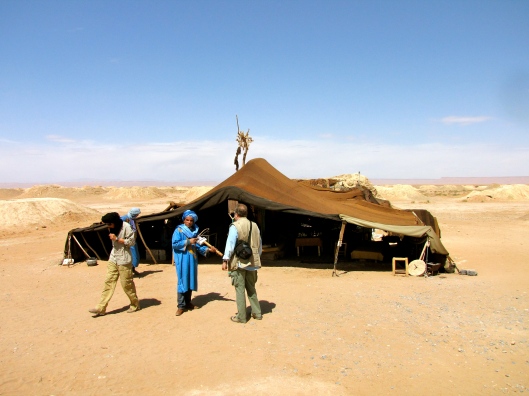 Refreshed and relaxed, we headed down the road with our final destination: the desert! But first we stopped at the market for a little shopping. It was, for me, the best place for photography. I found more subject matter at this market than practically any other place, for some reason! Maybe it was just because of the lighting or because of my mood or something but I found so much and felt the time was too short there. Plus, the batteries in both of my cameras went dead so for a certain portion of the time I had no options except Richard’s camera. “Take it from here,” I told him. “Try shooting it from this angle,” I directed. Finally he just handed me his camera and I took my shots. But it’s not easy to use a camera I’m not familiar with so I have no idea how those shots turned out. 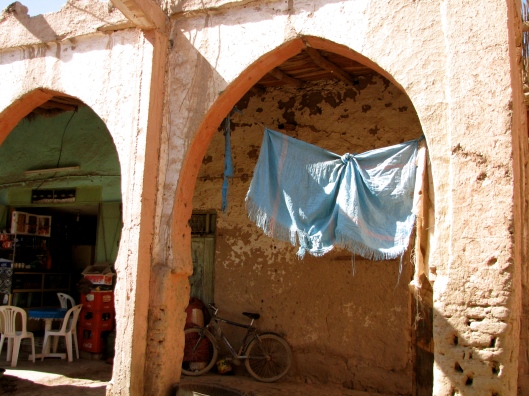 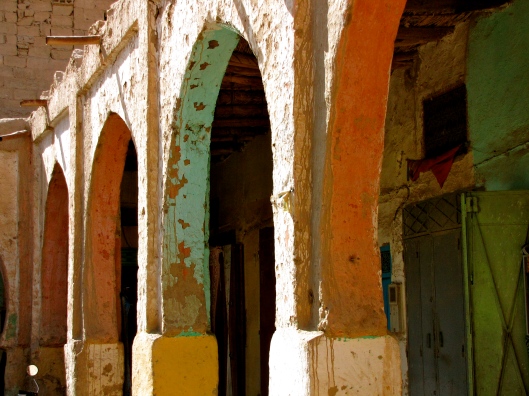 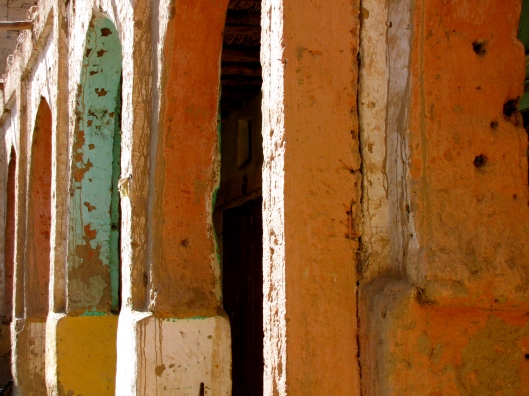 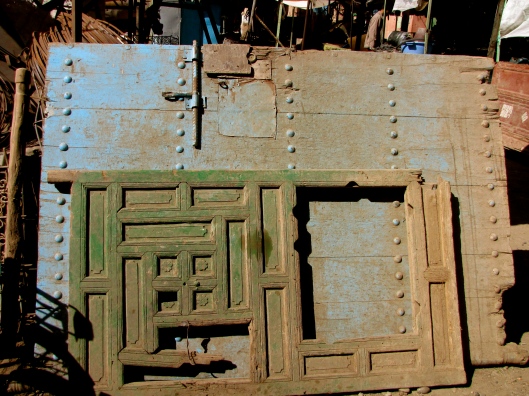 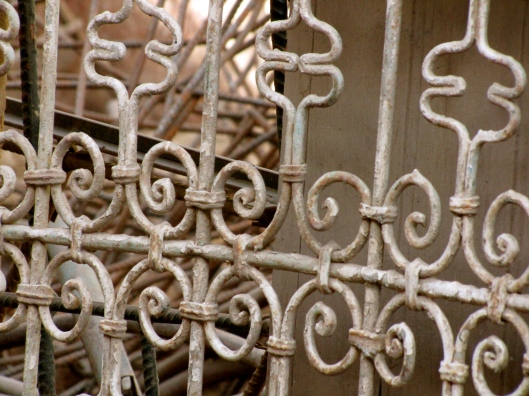 We stopped in a town to get money and for Mokhtar to shop for lunch. I loved this part of our days. Shopping each day for our lunch in the market and then finding a place to enjoy it was pure pleasure for me and something I looked forward to. 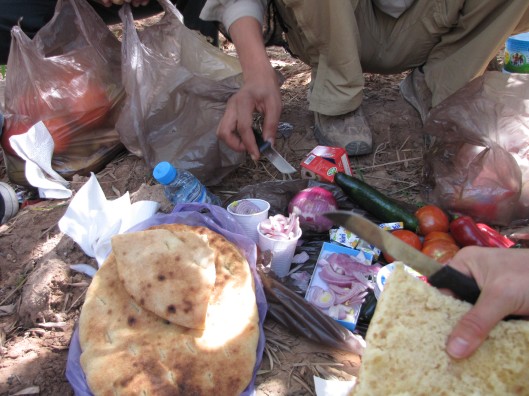 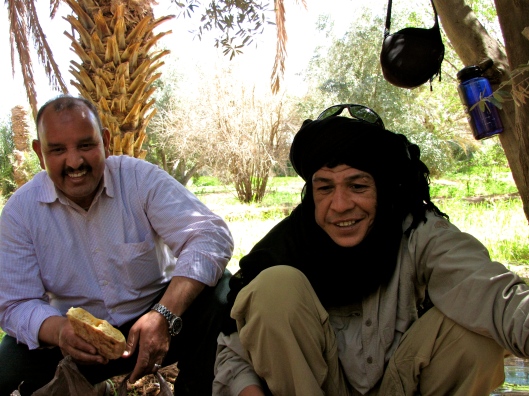 After eating lunch we gave our extra bread and food to a man and woman working in the field nearby. It felt good. And in the Islamic religion it is very important to do good unto others at least once a day. As I understand it, giving bread/food is among the best things a follower can do.

Next stop: the desert. But that merits its own post!