Seeing the Sahara Desert dunes for the first time was amazing! The sunlight on the dunes casts shadows that are beautiful. The dunes of Erg Cheggi are beautiful. Erg Cheggi is one of Morocco’s two Saharan ergs – large dunes formed by wind-blown sand. The other is Erg Chigaga near M’hamid. The dunes of Erg Chebbi reach a height of up to 150 meters and altogether spans an area of 22 kilometers from north to south and up to 5-10 kilometers from east to west.

We were in Merzouga at a hotel where we were able to log on to WiFi, drink some tea, and generally relax a little before heading out on the camels for our overnight camping excursion. This hotel also handles the accommodations in the desert, our tents and meals. It’s a beautiful little place and we had a great time relaxing there. Richard played his flute quietly while we lounged. The sun shone through the windows and cast such beautiful light on the various fabrics making the colors dance. It was beautiful and I was cognizant of my heightened senses, fully aware of all the beauty around me.

Suddenly and seemingly out of the blue the camels arrived and we were instructed quickly which one to get on and told to hang on. We were off! Since the camels are in sitting positions and since their legs are so long, they get up first in the front making the rider go way up in front, then the back making the rider go way up in back. It’s fun! But I can see that it is very important to hang on! I was in the front and felt really lucky about that because I had an unobstructed view of the desert before me. I also got some great shots of everyone behind me and of our shadows. My camel had a name but I really never knew it or understood what they were telling me it was so I never called it anything. I’d try to say things to it but realized we didn’t speak the same language so it would just look at me either blankly or like it was going to lunge its long camel neck and little head at me. We never really bonded, that camel and me. It seemed generally annoyed and didn’t have the excited approach to the whole thing that I had. We just never saw eye to eye. But he (they’re all male) served me well enough and I learned early on not to care if he liked me or not. At least he never spat at me, as I’ve heard they can do.

We plodded along between the town and the actual desert for awhile with two guys in djellaba leading us and Mokhtar in his white djellaba way ahead, basically flying over the dunes! It was beautiful. As we got to the dunes the boys took off their sandals and walked barefoot since it’s just easier to be barefoot there. I got some incredible photographs despite the irregular movement of the camel’s gait. 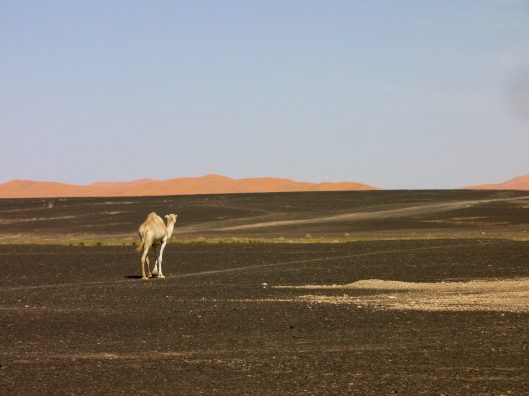 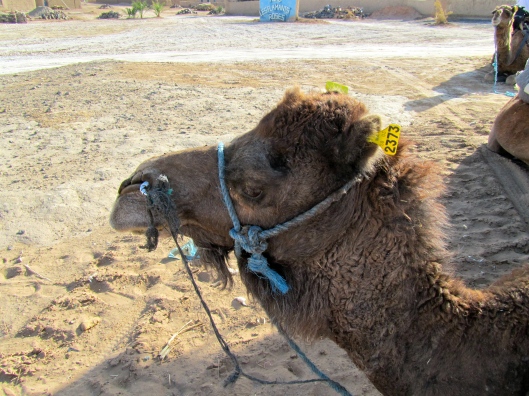 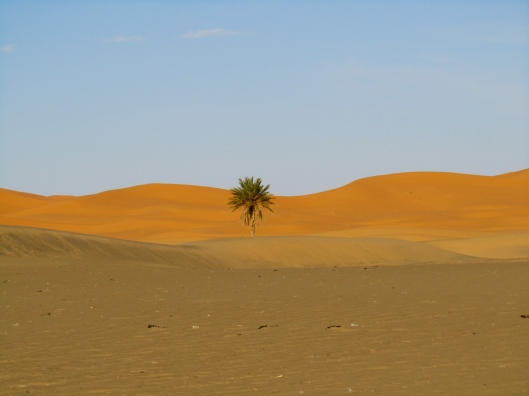 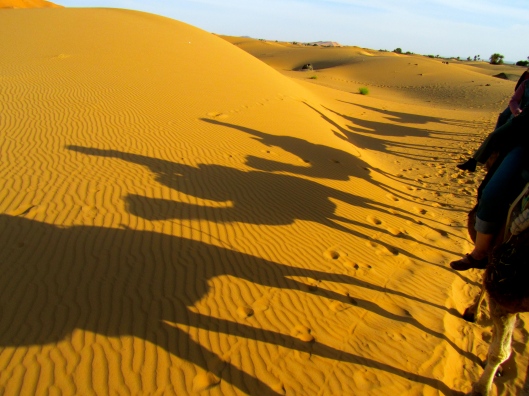 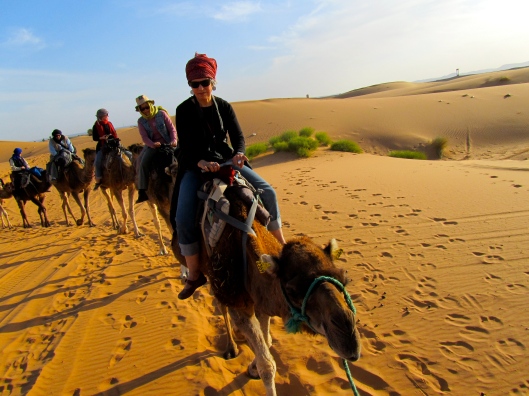 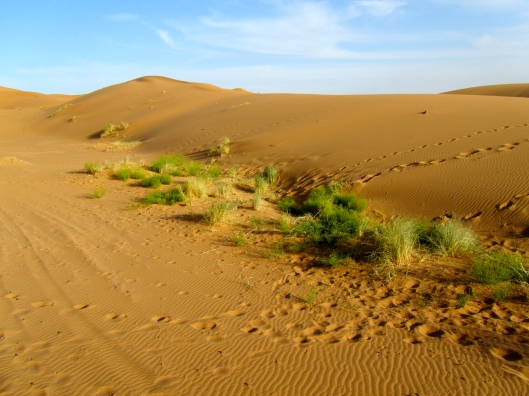 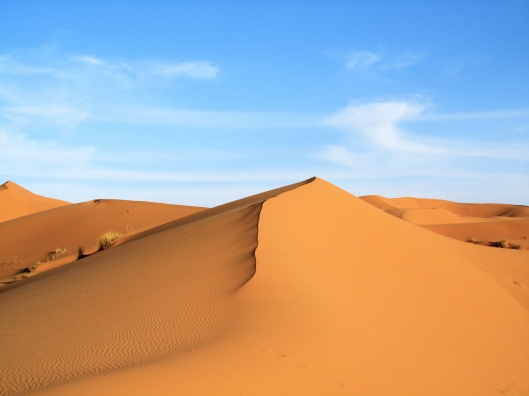 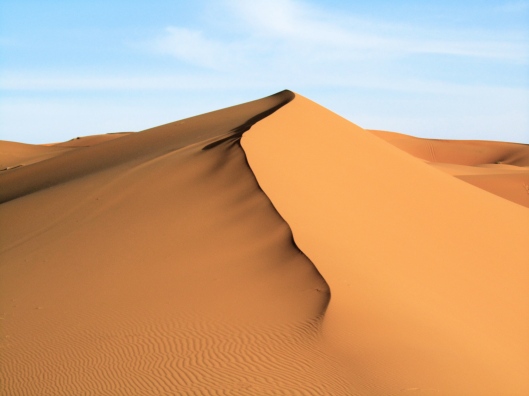 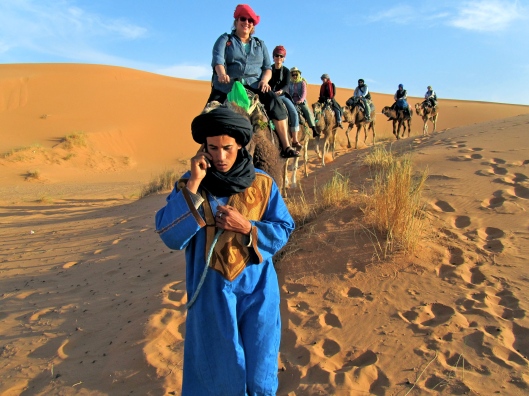 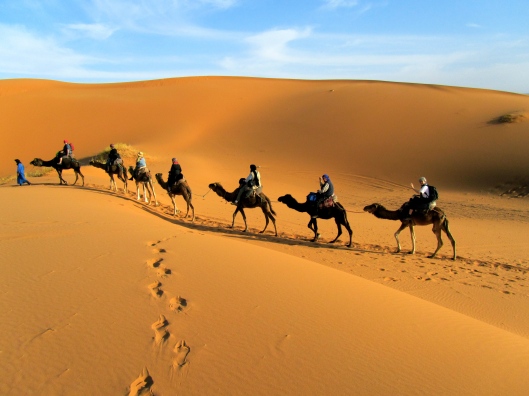 We rode for about 2 hours until the sun was soon to set. At a very high dune we dismounted the camels and were instructed to walk to ‘that peak’ where we would watch the sunset. That peak way up there? What!? So I started out with the rest of the group walking through the sand thinking about all the trudging I’ve done through snow in my life and how this was exactly the same and how much I did not like it. The sand isn’t the packed-down kind of sand on the trails rather it’s the wind-blown sand, that drifts, like snow. It’s because I’m heavier than the others that I had so much problem always sinking in. So I glanced at the sky and could see that there were clouds underneath the sun which meant the sunset would be ending sooner and that I didn’t need to go so high! I decided to stop right there in my tracks and not join the others at the peak. So while I wasn’t at the peak, rather about 50 yards from it, I was able to still see the beautiful sunset and to enjoy a few moments alone as well. And I got some great shots of the others. After the sunset we were instructed to walk down the hill toward our camels ‘way down there’. Going down is a blast. Mokhtar came to me and told me to sit down, which I did. He grabbed my feet and ran down the hill, me squealing in excitement the whole way down! Very fun! We walked to the camels and re-mounted them and rode a little way further to our camp: a tight square of Berber tents where we would eat and sleep for the night. 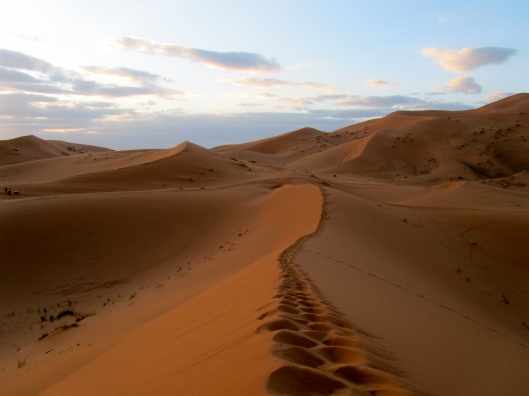 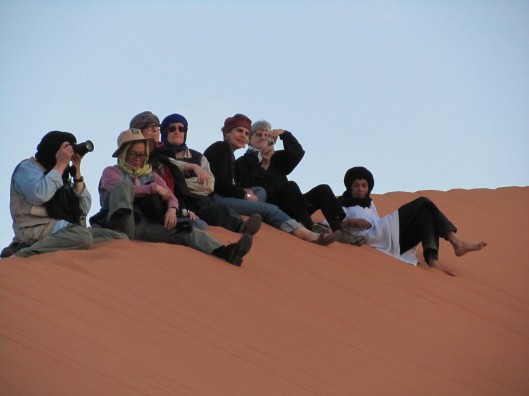 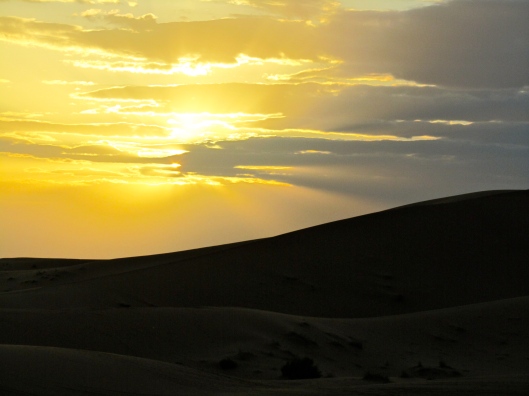 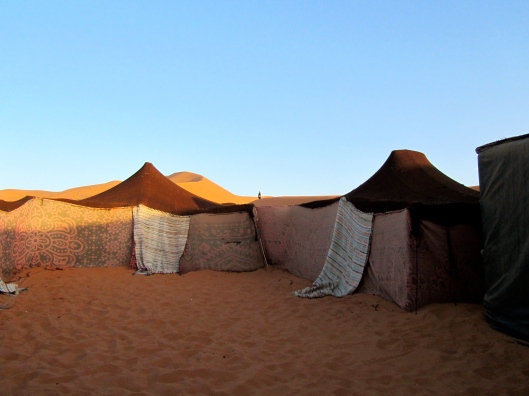 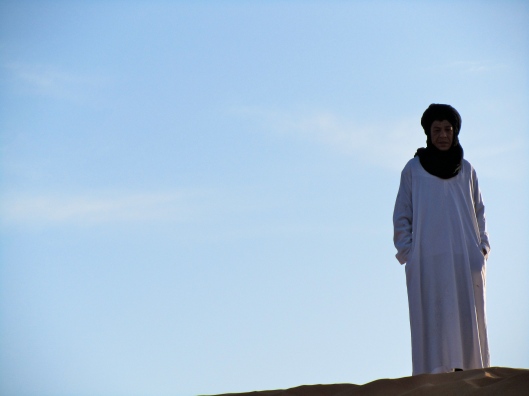 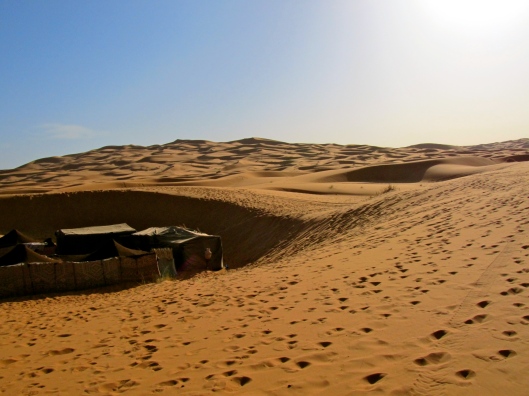 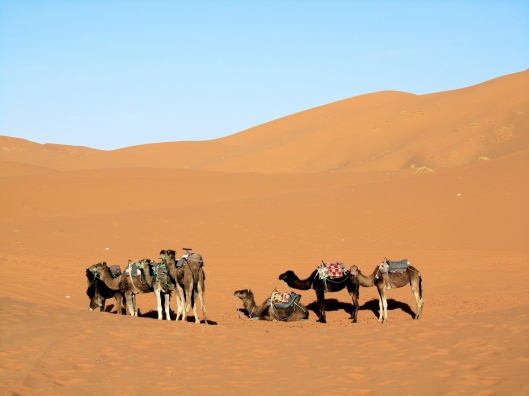 At one point during the ride in a 4-wheeler came noisily over the dunes, something we had discussed about the desert and how it concerned us that ATVs were allowed at all in this peaceful place. When this particular ATV showed up the group was livid and showed the driver as much by giving him the finger. After he was out of sight, Mokhtar laughed and told us that was the guy delivering our food and water for the night! Basically a ‘don’t-you-feel-stupid-now’ kind of a comment. Ha. We climbed one last dune just over the camp and sat for a few moments enjoying the vast sky and quiet. And we enjoyed a glass of mint tea. How beautiful! It might have been here that I made my infamous-with-Richard comment about how great it would be to enjoy the northern lights in a sky like this… Yes. I said that. Here I am in Morocco underneath the most beautiful sky known to man and I’m talking about seeing northern lights. In Morocco. It made for a lot of laughs at least!

We enjoyed tajine in the dining tent as well as cold beer and some wine. It was heaven on earth. A little cool, they put a heater on for us and it was perfect. Later, while on a “bathroom” break, we watched the stars. I was hoping to see my first shooting star in the desert. I have never seen a shooting star! Alas it was not to be. But I still enjoyed the most beautiful evening sky I have ever seen. There is no obstruction either visually or with sound – – unless you count the bongo drums from the next camp beating in the distance or the sounds of children playing from the nomad family living right over the next dune! This evening in the desert was one of the most special evenings of my life for a variety of reasons…

After a cold’ish night sleeping in the tent everyone got up to see the sunrise, except me and Mokhtar. Sunset-Schmunset, I thought. They say it was beautiful and I’m sure it was. I prefer sunsets. Unbeknownst to us, Marianne and Susan were celebrating their 27th anniversary that day so they were particularly excited to see the sunrise where they wrote in the sand and took photos. Very special. When they returned they shared how they met, a bit about their time together, and their lives in general. It was a nice morning mostly because of that time to share personal stories. We ate breakfast and were on our way out of the camp.

Hanging around our camp that morning were a little boy and girl, about 6 and 8, with backpacks. They ran around us but were a little shy. Turns out they were waiting for the mule to come and take them to school. They were basically waiting at the ‘bus’ stop for their ‘bus.’ They are the children of the nomadic family living nearby and were on their way to a nomadic school nearby. The teacher travels through the desert for a week or so at a time and that’s when the children attend school. They looked exactly like kids waiting at bus stops here in the states. No difference at all. Except these kids live in a desert and ride a mule to a school that is a tent. So cool to see.

We had a beautiful morning to ride out of the desert. The light was perfect for pictures, although today I mostly just enjoyed the scenery and contemplated my experiences so far. I had no problem getting back up on the camel this morning either physically or mentally – – I was excited about it. And I never had any pain at all in my muscles from riding the thing! I was very surprised because those can’t be muscle groups I use every day, that’s for sure.

At the edge of town we were met by Mokhtar, Achmed and the van, and the owner of the hotel who had brought us our supplies by ATV the night before. We dismounted and were heading in to the town of Merzouga where we would return to our hotel from yesterday to shower and ready ourselves for the day – – a perfect oasis! The owner of the hotel had a blue car. It was the car we followed to bring us in to the hotel; our lead car. He came up to me, put his arm on my back and said, “Please. Get in to my little car.” It still cracks me up for some reason. His English is amazing, but his accent whilst saying this just hit me funny. It is something I have repeated many times for various reasons and I’m sure it will now be one of my standard sayings in life. “Please. Get in to my little car.” Ha. I did and off we went to the hotel where I got a bit of a head start on clean-up and relaxation and internet. Nice treatment that I now know Mokhtar was responsible for due to some things the hotelier said on our drive. Sweet.

This hotel is one of my favorite memories on the whole trip. Very peaceful and beautiful!! And the shower, although not much more than a trickle due to all the people showering at the same time, was heavenly. And the clean clothes I put on! So nice. 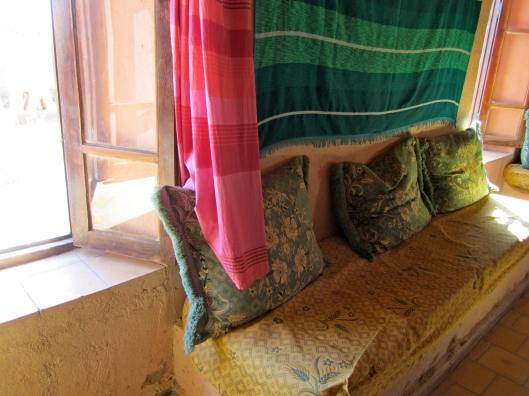 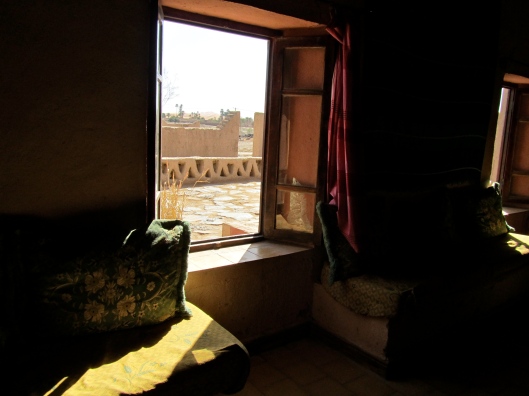 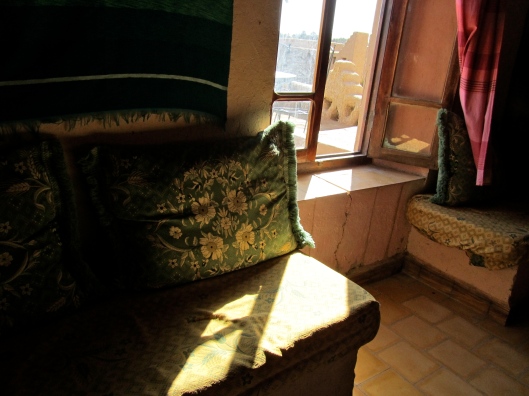