Today I toured with Mokhtar around Marrakech. After coffee (nus nus), an omelette cooked in a tajine (yum!), and WiFi,

we headed to the tannery to see how animal hides are processed and turned in to leather. It was interesting and definitely not as smelly as it could’ve been had the weather been hotter and sweatier. Still, we bought the bunch of mint available at the entrance to hold in front of the nose to ward off the smell, just in case. The tannery is full of concrete vats with stacks and stacks of pelts in various steps of processing. There’s lime to burn the fur off the skin, there’s a vat of chemical and water with cinnamon to tint the skin (soon to be leather) brown, a vat of chemical and water with “saffron” (or colorant) to make the skin turn orange/yellow, and various other colorants for other colors. There are men standing thigh deep or waist deep in these vats, often filled with chemicals. And there are men cutting skins with knives – – because it appears that they’ve been pulled right off the body so they needed to be cut so they are flat pieces of skin. I didn’t get the level of detail of information I would have liked due to not understanding my guide so I ended up just taking pictures. Here’s a link from Wikipedia about tanning, in case you’re interested: http://en.wikipedia.org/wiki/Tanning. I very much enjoy stuff like this and would have liked more information, but I think this Wiki site tells a lot. At one point I asked the guide about these guys standing in chemical (not all of it is chemical but even the water can’t be hygienic!) and he looked at my puzzled. “Everyone needs to work,” he replied. So work is the most important thing, even over potential health issues. It was well worth the visit. 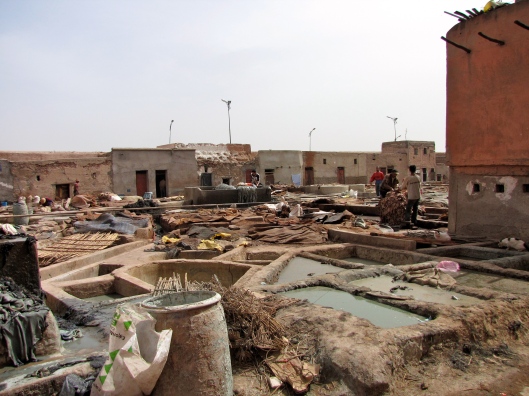 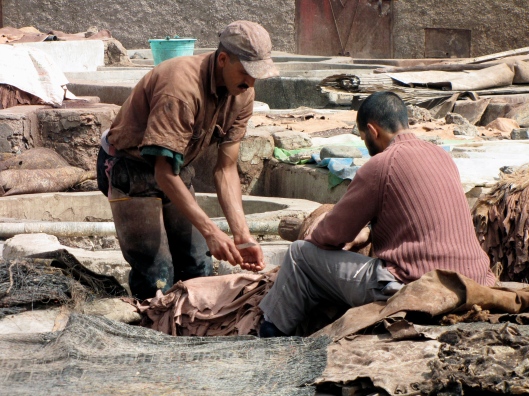 After the tannery I did the seemingly-mandatory perusal of the leather shop associated with the tannery. i didn’t want anything but looked to be fair to myself. The guy did his best to make me buy something and got a little annoyed when I asked Mokhtar to tell him I wasn’t interested (after I had asked a price of a particular silk piece I would have considered had his original price not been so high). Through Mokhtar I apologized to the guy for starting the conversation and told him I really wasn’t interested and didn’t want to offend him. We left unscathed after I extended my hand to him and he reluctantly shook it and we said goodbye. Clearly the goal is to sell me something.

It was hot out and we went right to the car to head to our next stop: Le Jardin de Marjorelle. What a beautiful place! Here’s what Wikipedia says: The Majorelle Garden (Arabic: حديقة ماجوريل‎) is a twelve-acre botanical garden and artist’s landscape garden in Marrakech, Morocco. It was designed by the expatriate French artist Jacques Majorelle in the 1920s and 1930s, during the colonial period when Morocco was a protectorate of France. The garden has been open to the public since 1947. Since 1980 the garden has been owned by Yves Saint-Laurent and Pierre Bergé. After Yves Saint Laurent died in 2008 his ashes were scattered in the Majorelle Garden.

I walked slowly through the gardens taking some gorgeous photos. It’s impossible not to take beautiful photos in this place! 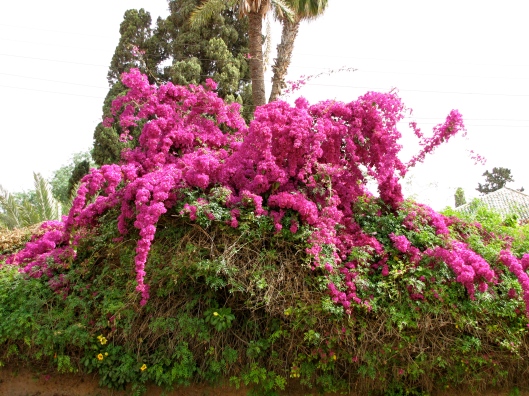 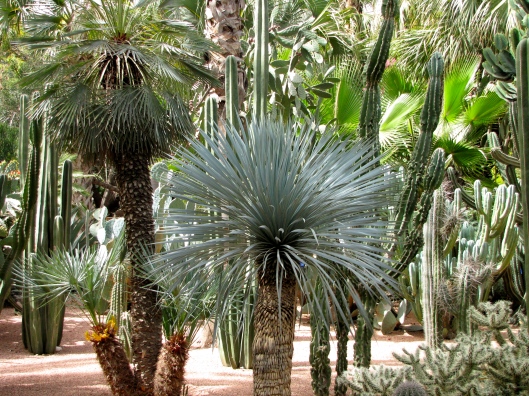 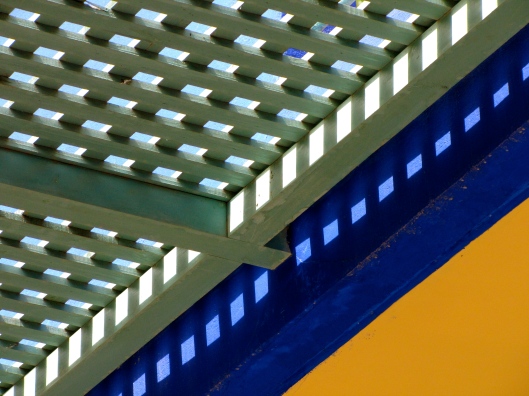 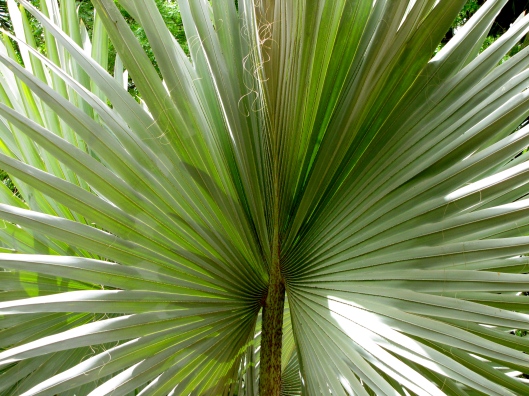 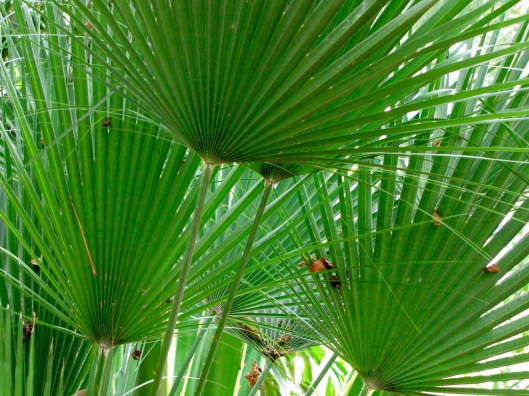 From the garden Mokhtar dropped me at the palace with instructions that I was to meet him under the flag in the souk at the silversmith shop he recommends I use to buy some silver. I meandered through the grounds of the palace enjoying the sunshine, the flowering trees, and the smell of jasmine wafting everywhere! It was mesmerizing! Here are some photos, before I go on… 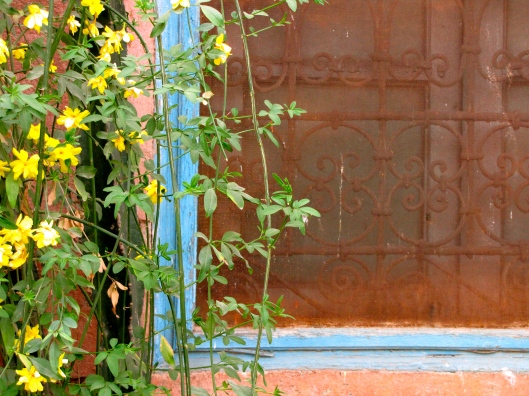 Continuing to walk into the courtyard of the palace, I saw Marianne, Susan, Richard and Barbara! I was genuinely so happy to see them because we had been separated by differing activities for far too long! It was so much fun to run in to them. We sat on the bench and talked for quite a long time and I hated for them to leave. Meantime, Mokhtar called and wondered where I was; he had been waiting for a long time for me and I’m sure was wondering what was going on. So therefore, I rushed through the palace rather quickly. But what a gorgeous place! I had enough time to take some great photos, but not to learn anything about the place, which I suppose is fine since I was all about taking pictures. 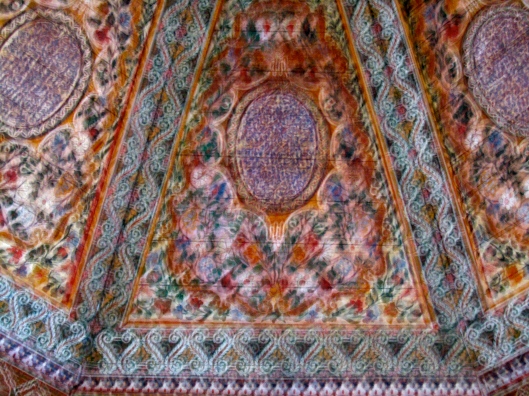 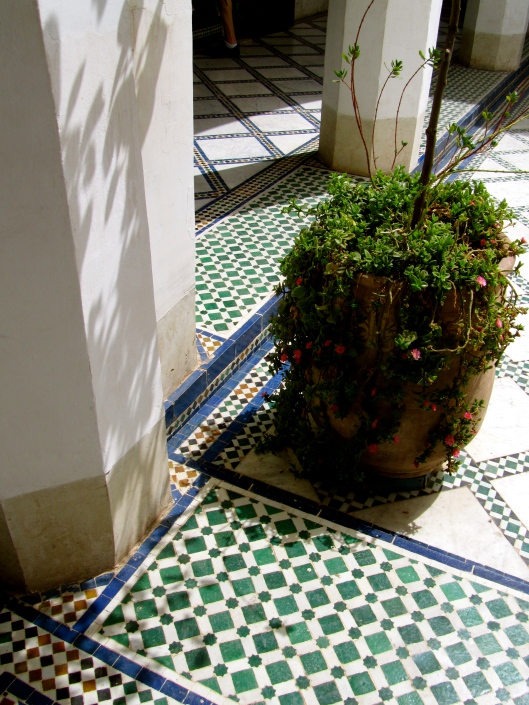 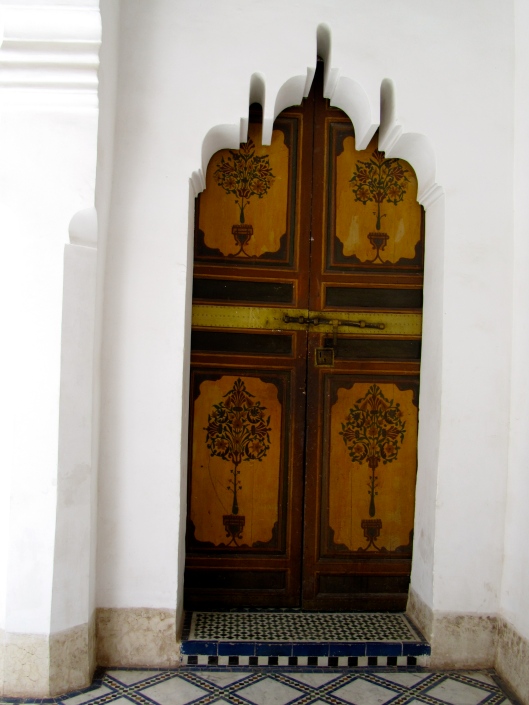 Marianne and Susan halfway intended to meet Mokhtar at the silver shop so I directed them to it and told them I’d be home within two hours so I could let them in since they didn’t have a key. I walked down the street admiring the beauty all around me and spotted them way down at the end of the street. They turned down a narrow street before I could get to them so we shopped without them, sadly. The silver shop was small but filled with great stuff! I bought a beautiful ring and a bracelet. They gave me a charm of the hand of Fatima as a gift. It was a fun stop and I’m happy with my purchases, even now that I’m home! 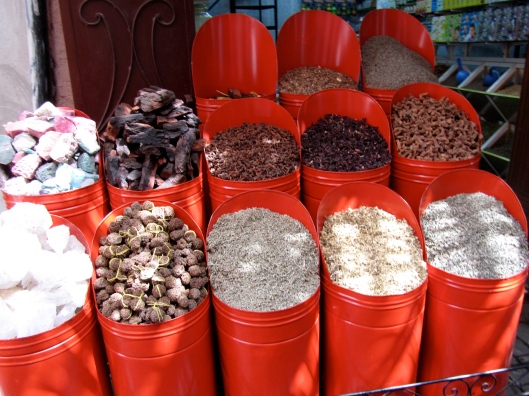 Since we decided we were going to make omelets for breakfast for everyone the next morning, Mokhtar went and ordered the seasoned meat we planned on using. It’s not an easy thing to find or buy so he had someone get it ready for him to pick up later. After shopping for silver we walked around in the souk a bit and then went back to the riad so that I could let Marianne and Susan in and so we could attend the second cooking class: chicken and vegetables with preserved lemons and Moroccan salad. I found the cooking classes frustrating because we didn’t get to do our own chopping, talking or cooking! Our “teacher” was a pregnant girl who didn’t feel well and had a bad attitude in general. She rushed through the whole process at lightening-speed and bolted out of there before we knew what hit us. Asking questions did no good because she didn’t speak English. The head of the cooking school told us that every family has their own way of doing things and that she did things differently. Well, I no more know how to make chicken and preserved lemon than I do a figgy pudding. It’s frustrating because I paid to learn these things and suffered through some really annoying hours to get to this point. But I digress. I don’t want to focus on the only negative part of the trip. So I’m done discussing the cooking “school” experience on this blog.

Here’s what. As a group, we always had fun together! We laughed a lot and generally enjoyed each other’s company. At least I speak for myself on this. I grew very fond of these people I traveled with during these two weeks and I loved being with them! But I also liked being on my own exploring Marrakech in the way that suited me.

4 thoughts on “Out and about in Marrakech”