Istanbul is one of the largest cities in the world. With more than 14 million people officially, real estimates are thought to exceed 17 million due to something having to do with the 2010 census and displaced residents. And the place feels big! Located in the northwest of the country, it lies on the Bosphorus strait and encompasses the natural harbour known as the Golden Horn. Extending both on the European (Thrace) and Asian (Anatolia) sides of the strait, Istanbul is the only metropolis in the world situated on two continents. The greater Istanbul metropolitan area held 18% of Turkey’s population in 2010. It ranks as the world’s 7th fastest growing metropolitan area in 2011. The Bosphorus, which connects the Sea of Marmara to the Black Sea, divides the city into a European side, comprising the historic and economic centers, and an Asian, Anatolian side; as such, Istanbul is one of the two bi-continental cities in Turkey, along with Çanakkale. The confluence of the Sea of Marmara, the Bosphorus, and the Golden Horn at the heart of present-day Istanbul has deterred attacking forces for thousands of years and still remains a prominent feature of the city’s landscape.

The first day consisted of a long tour around the city visiting all the hot spots: Hagia Sophia, The Blue Mosque, Topkapi Palace, the Grand Bazaar, the Spice Bazaar, and lots of driving around the city seeing all sorts of cool stuff. I enjoyed it. It was a Gray Line Tour, and those are generally good no matter where one visits. And the tour guide! She was phenomenal! Talented and well-spoken in many languages, I liked her right away and she me. I think I made her job easier because I was always at our meeting spots early and somehow assumed a pseudo-leadership role in the group because people recognized me as part of the group and stuck with me, even the stragglers. This meant that all of us were generally together and on time! (I noticed what a difference that was the next day when I took a different Gray Line Tour and didn’t assume any kind of leadership role.) At the end of the day I was the only guest left on the bus so got all sorts of time alone with her as she taught me all sorts of stuff about Istanbul – – the personal side of it, like where people prefer to live, where people party, best restaurants, the best tours to take, and other interesting facts. Granted, I didn’t get back until close to 6:30 p.m. but that’s OK since I learned a lot and had fun.

The first place we visited was the Hagia Sophia. Famous in particular for its massive dome, it is considered the epitome of Byzantine architecture and is said to have “changed the history of architecture.” It was the largest cathedral in the world for nearly a thousand years, until Seville Cathedral was completed in 1520. The current building was originally constructed as a church between 532 and 537 on the orders of the Byzantine Emperor Justinian and was the third Church of the Holy Wisdom to occupy the site, the previous two having both been destroyed by rioters. In 1453, Constantinople was conquered by the Ottoman Turks under Sultan Mehmed II, who subsequently ordered the building converted into a mosque. The bells, altar, iconostasis, and sacrificial vessels were removed and many of the mosaics were plastered over. Islamic features – such as the mihrab, minbar, and four minarets – were added while in the possession of the Ottomans. It remained a mosque until 1931 when it was closed to the public for four years. It was re-opened in 1935 as a museum by the Republic of Turkey. The place is gorgeous and massive! 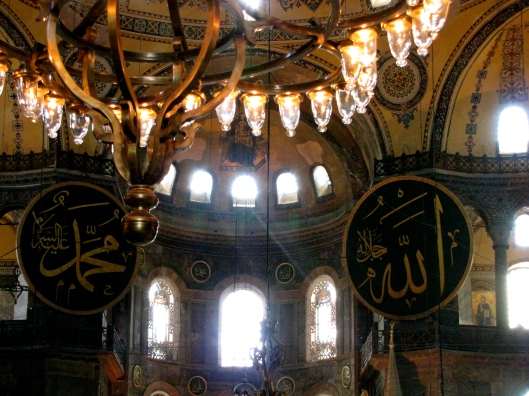 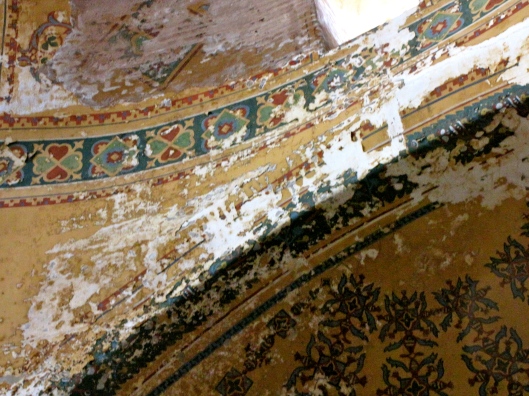 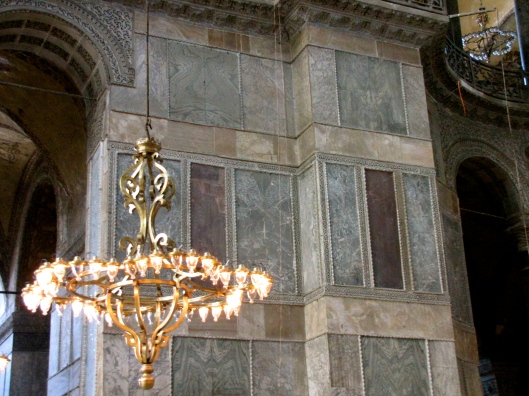 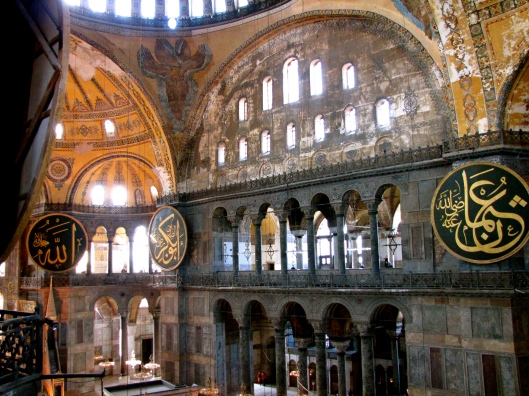 And these posters show what’s underneath all the paint! Absolutely amazing. The last photos show where they’ve removed some of the paint covering a large mosaic at one of the entrances. The next blog entries will show other sites in Istanbul; too much to put in one blog post. 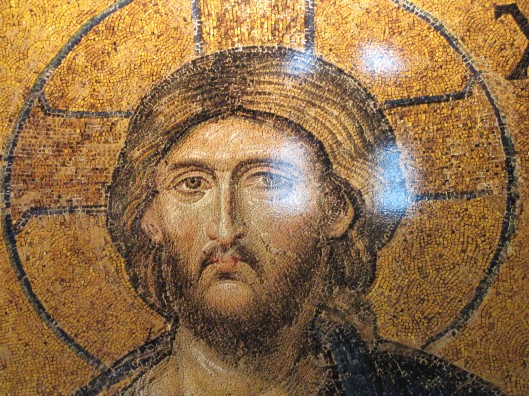