After viewing Hagia Sophia, we walked over to the New Mosque, or the Blue Mosque, so called because of the blue tiles adorning its interior. While the Ayasophya is gorgeous and I loved it, I think I liked the New Mosque better. It is breathtaking inside with its blue tiles – – in various shades. And there are gigantic carpets inside that must have taken years to weave! Very impressive. And the thing is, this is still in use. So we had to remove our shoes and place blue paper shower caps on our feet. The domes of the thing are spectacular and the way the light shines in is brilliant. But what was also impressive to me were the thousands of black electrical cords hanging down to bring light to the massive chandeliers all over the place. Massive chandeliers! Spectacular! It was built in the late 1500’s. It all is just so amazing. And now since I’ve come home I’ve seen the image of this mosque in multiple places, including on the cover of this month’s Travelsmith mail order catalog for travelers. It’s like driving a certain car: once you get that kind of car you see them everywhere! 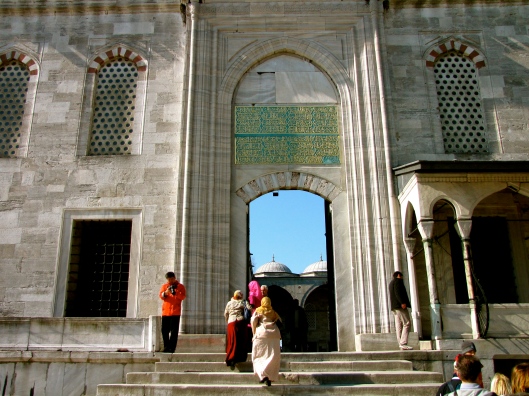 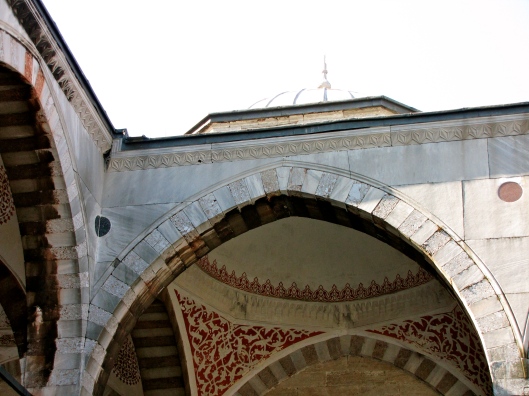 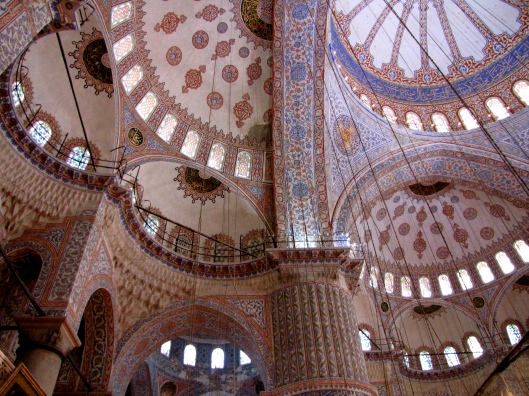 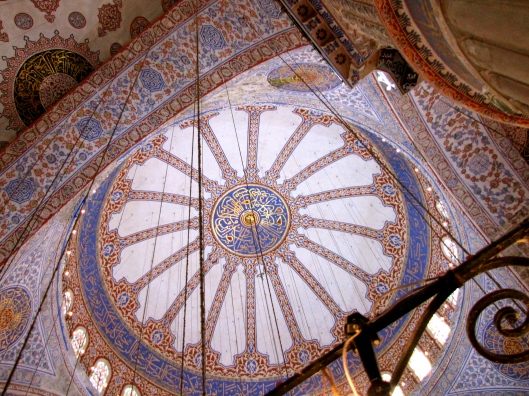 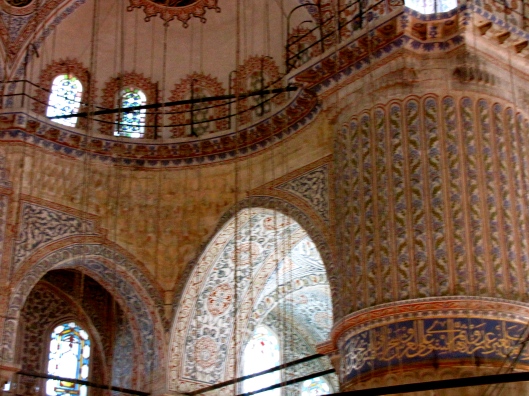 After walking around the grounds of the New Mosque it was time for the group visit to what I learned was customary for these tour groups: the set up. Today’s set up was to a rug shop where authentic rugs are sold “because you can’t guarantee the authenticity of rugs sold in the Grand Bazaar,” they told us. That was all just fine with me because 1. I knew I was going to buy one or more rugs, and 2. I didn’t want to tramp all over Istanbul talking to every shopkeeper before I found the right price for the right style not to mention the right design and color. So I happily sat through the formal session explaining rugs and quality and materials used, etcetera. And the whole while I sat there I knew, just KNEW that I was a mark for every sales guy in there.

It was obvious I was going to buy and I knew it. I wasn’t smiling or nodding or doing anything like that but I could tell those sharks were smelling my blood from the second I walked in. And it wasn’t until later that a woman who worked there told me I had a certain quality unlike my fellow travelers; a friendliness about me. While I’ve heard that before in other settings, I knew in this setting that that meant I was an easy mark for a sale! No matter how hard I try, I cannot remain expressionless. So be it. There was this older guy that kept giving me the glitter-eye. Ugh. I did not want him to help me. Then there was this younger guy with an engaging smile that I thought would be more fun. He’s the one who approached me as soon as the presentation was over. “Where are you from?” he asked. “Minnesota.” “My girlfriend lives in Minnesota!” he excitedly exclaimed. ‘Yeah, right,’ I thought. So thinking I was going to catch him in his own fib I taunted him with, “Where exactly does she live?” To which he replied, “Brooklyn Park! Where do you live?” What?! He really knew the area. He went on to talk about his recent visit last autumn where they visited the zoo with her nieces. I told him about my nieces (which I used in the bargaining of the rugs in the end) and he described more about the places in Minnesota he has visited, including Stillwater, St. Anthony Main, downtown Minneapolis, and the Mall of America. We actually had a nice little connection going and our enthusiasm with one another drew attention from all the other workers in the place. They gathered at the door 5-6 deep staring in with big smiles on their faces watching this sale go down.

Then the piling of the rugs began! Rug after rug was brought before me and piled upon the next whilst I sat sipping tea they brought me. I said ‘yay’ or ‘nay’ for each rug as it was spread out before me and soon I had the two I knew from the gitgo that I was going to buy along with three others “for the nieces” that they would throw in for free. I got a price I was happy with and one I’m sure they were happy with – – and one I’m sure my tour guide was happy with, since she gets a cut of all sales – – and they packed me up to go, all the while trying to pressure me in to looking at jewelry. I get what they’re doing and I’m all for it since I’m in sales, too. But finally I had had enough and told them I was starting to feel trapped and pressured and I didn’t want that so I was going to leave. I got the nod of approval from the head honcho when I said that so they let me go. He could tell I’d had it.

So I left and stood outside waiting for the bus to arrive along with fellow tour takers. It was then that the older man who had been giving me the googly eyes approached me and asked me to spend the day with him the next day. He’d “love to show me around and give me the desires of my heart in Istanbul” he promised. Ew. I muffled an uncomfortable or grossed-out laugh and thanked him as I took his business card with his cell phone scrawled on it. I reminded myself to be gracious and then waited a polite amount of time before rushing off to get out of his presence. I was able to walk around and take a few pictures of the surrounding area on a sunny day before getting back on the bus and heading to our lunch at a restaurant set up purely for tourists… Ah, a Gray Line Tour.

Of the pictures below the first two are the two rugs I purchased; the rest are ones I looked at. 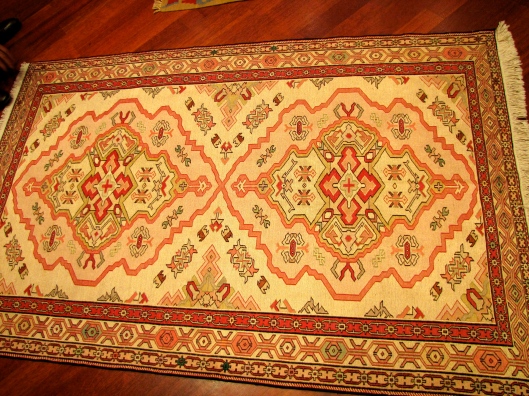 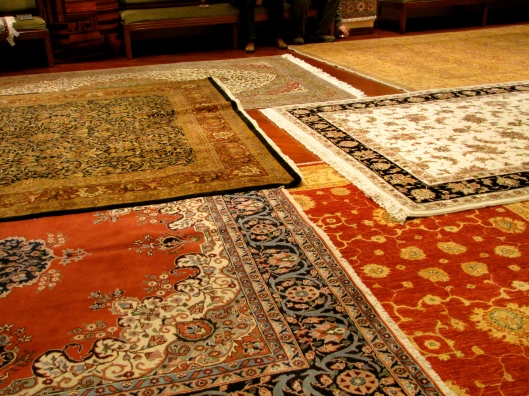 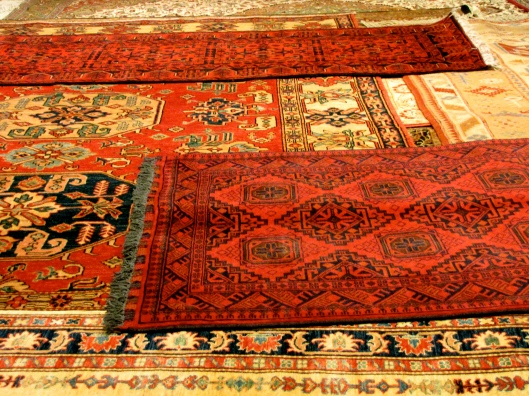 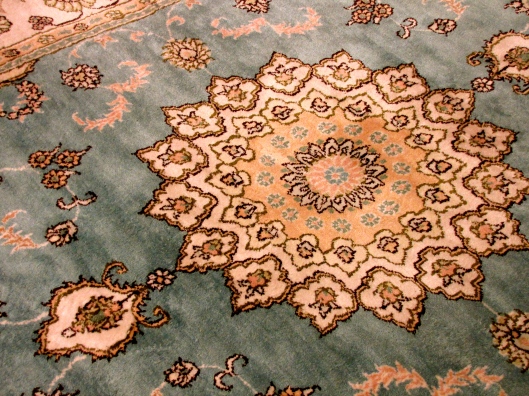