OK, bad play on words for this title, I’ll admit, but since ‘Essaouira’ is pronounced as ‘eh-sweer-uh’, I thought it was kind of funny. It’s like the town of Ouarzazate sounding like ‘where-zuh-zaht’ or ‘where is that?’ I wonder how many other towns in Morocco sound like stuff? I do know that the Berber people are called Amazigh and every time I saw that word I thought of ‘amazing.’ It’s still how I pronounce it when I see it. (The word means free man, noble man or defender.).

This is part 2 of my post about Essaouira. It was such a beautiful city and a full day that I’m doing it in multiple parts. We visited the seaside first; the first sea views or really even water views that I’ve had since arriving in Morocco. And it was beautiful! There’s something about the sea and water for me: the movement, the smells, the sounds, the cool air – – everything! And all of this in the ancient city of Essaouira with its crumbling buildings and rich history. Simply amazing.

Most of the buildings around today are from the 18th century. In the mid 1760’s, the Sultan Sidi Mohammed bed Abdallah installed himself here so he could have his corsairs go and attack the people of Agadir who rebelled against him. He hired a French architect, Theodore Cornut, to create a city in the middle of sand and wind, where nothing existed. The port soon became a vital link for trade between Timbuktu and Europe. It was a place where the trade in gold, salt, ivory, and ostrich feathers was carefully monitored, taxed and controlled by a garrison of 2000 imperial soldiers.

By 1912 the French had established their protectorate, changed the town’s name back to Mogador and diverted trade to Casablanca, Tangier, and Agadir. It was only with independence in 1956 that the sleepy backwater again became Essaouira. After Orson Welles filmed Othello here, and since Jimi Hendrix paid a fleeting visit and the hippies chose Essaouira as a hang out, the town has seen a steady flow of visitors, from artists, surfers and writers to European tourists escaping the crowds of Marrakech.

So there’s some more history of Essaouira. I find it interesting to know its history because it is definitely a place of interest and beauty – – but I didn’t know some of this stuff until returning home. It’s a great place to just walk around and visit the medina, the souqs, the beach, etcetera. As of 2001 it’s been on Unesco’s World Heritage list. It has a mellow atmosphere with narrow winding streets that are lined with little shops. There are so many wooden doors all over and beautiful buildings that it’s hard for the photographer in me to keep moving. As I’ve said before, if forced to stand still in one spot for 30 minutes or so, I’d be able to fill a complete disk on the camera with photos! It is absolutely the most beautiful seaside village I’ve been to so far – or at least until I visit the next one. 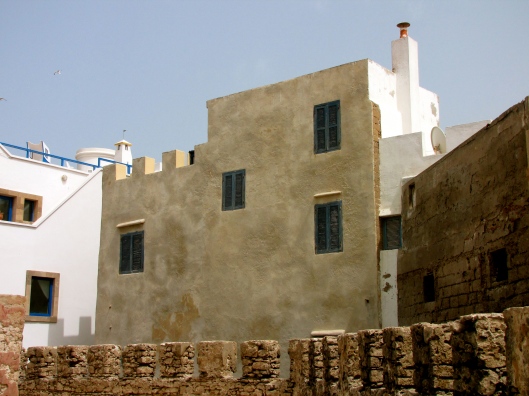 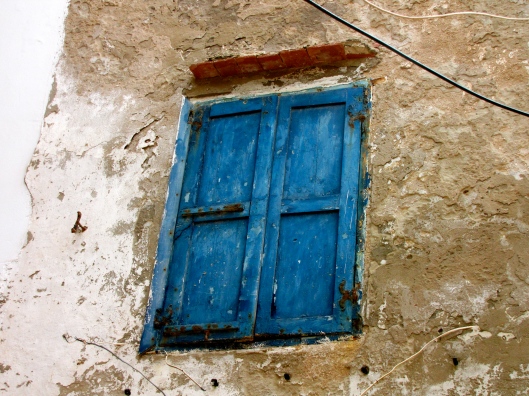 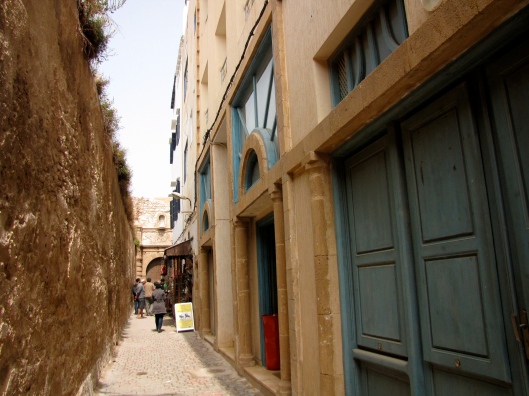 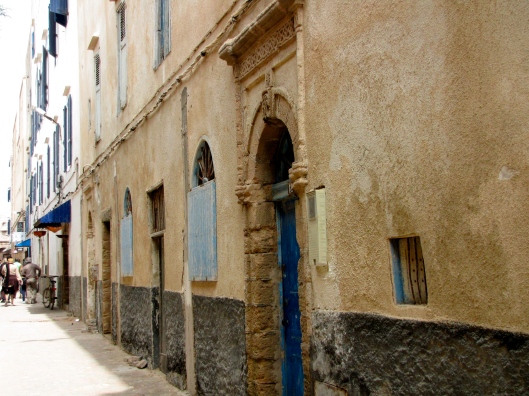 I knew a few things before arriving in Morocco: I was going to buy a Moroccan rug in the colors of red and blue, I was going to buy something wooden and brightly colored, I needed some little glass tea glasses in bright colors, and I was going to buy djellaba for me, my sister, and the kids. Check, check, check, and check! Having already taken care of the first two things on the list (and then some!) earlier on in the trip, I saved the glassware and the djellaba for Essaouira. Instead of a djellaba that customarily has a hood, I really actually bought Tourag caftans for all of: mine in light blue w brown embroidery and theirs’ in royal blue w bright gold embroidery. I could have bought all sorts of cool stuff on this trip but did a good job of saying no to most everything except the things on my list. And I know I’m going back so there’s always next time! 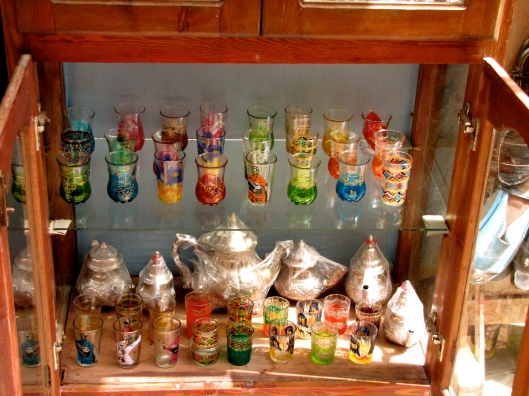 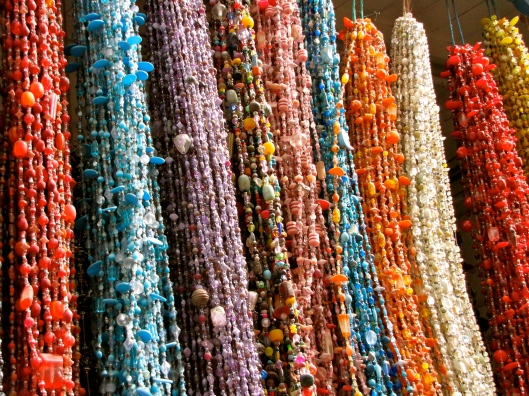 We walked around in the medina and looked out on the ocean. It was beautiful. The city is walled and we walked on top of the wall, along the sea, and I took a bunch of pictures. There are many shops inside the sea wall that have been there for decades. It’s really quite something. And the thing I liked about it, and have mentioned before, is that it’s a place for locals, not just tourists. In fact, it’s not very touristy, except for the shopping I suppose. But even that’s low-key and people rarely bother you while you’re looking at their stuff. In fact, I had to seek someone out to help me with a purchase! That would never happen in Marrakech, or anywhere else I’ve been in Morocco for that matter! I loved it. The djellaba purchase was the only one I bargained for and ended up getting them for much less. But the glasses were already such a great deal that it wasn’t even worth bargaining for less! It was a perfect price for me and was fair for the shop keeper as well! Deal deal. Good for you, good for me. We left the purchases there and continued walking around the souq. It was amazing! Having a beautiful sunny day doesn’t hurt, I’m sure. And being with people I adore isn’t bad either, but this little city is a jewel! I absolutely love it! 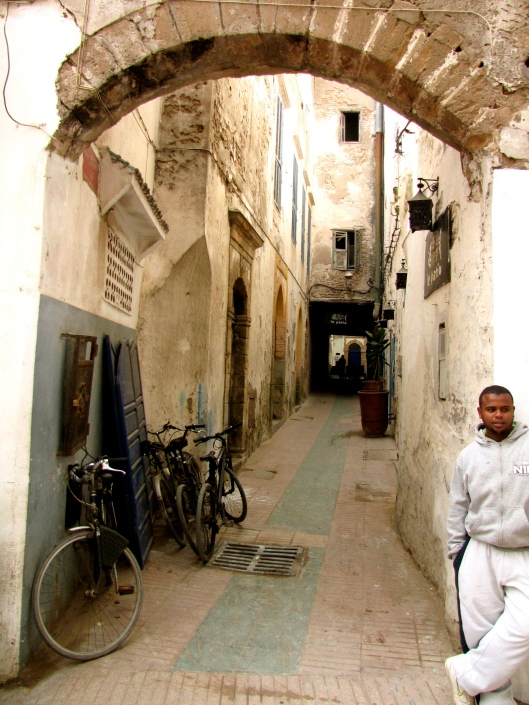 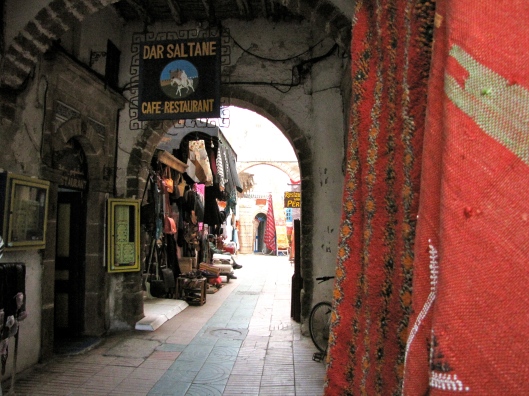 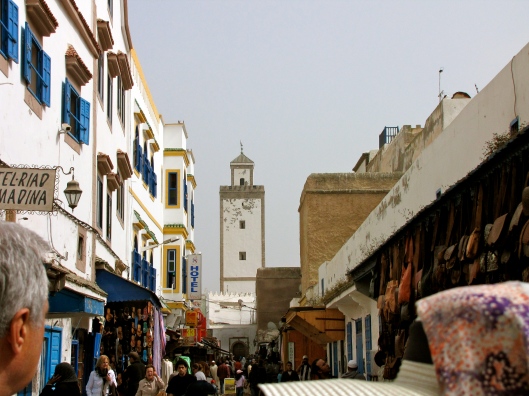 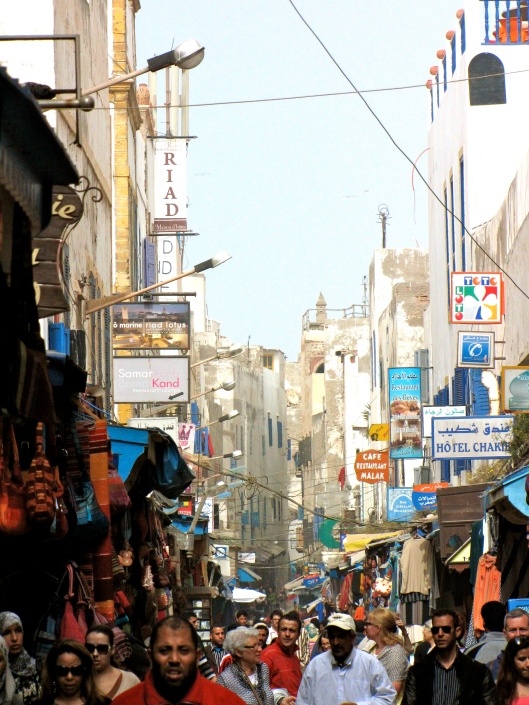 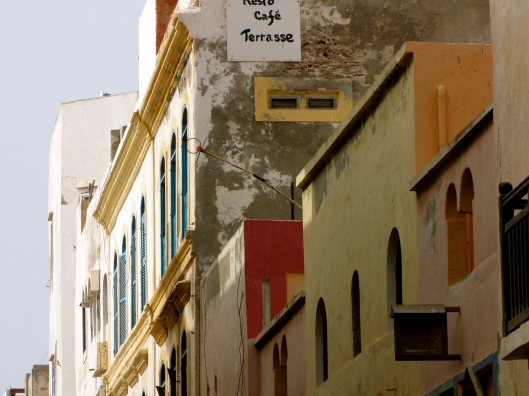