After walking around Essaouira and enjoying the day together, we went back to the seaside and had a lunch of Moroccan salad, the fresh catch of the day and Coca-Cola. There are a bunch of little fish shops set up all around on the beach where you pick your spot on a picnic table, select your waiters, and then choose from the fresh catch of the day and, voila! Lunch is served! There are also roving musicians who serenaded us whilst we ate. All the while the waves crash on the shore not too far away, the sun shines down, and we continue to be joyful. Richard’s toast was fitting: To our continued adventure with new friends! And then we dined on fresh squid, fresh sea bass, prawns, and sardines! Tres bon. 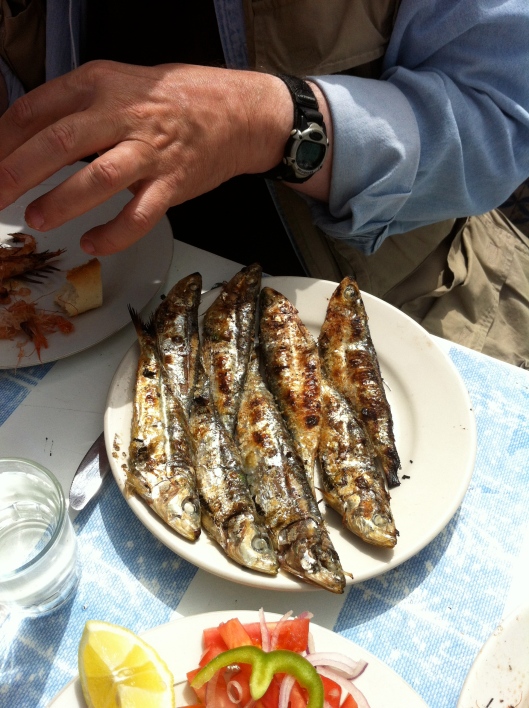 After lunch we realized we needed to hit the road if Barbara and I were going to make our hammam visit that evening. So we popped in the CDs Mokhtar and Richard just purchased and headed back to Marrakech. I was sad for the day to end. But I was also looking forward to everything that was still before me. Especially the hammam experience.

The music made me emotional. I couldn’t deny that this portion of the trip was almost over. The relationships with the people I had spent so much time with were important to me already and the thought of not seeing them regularly was already sad for me. I’m never good at goodbyes, that’s a fact. As a child I cried when we sold a car, a piano, or left a hotel room. But add music to the mix and I become a real wreck. Only Barbara knew how emotional I really was there in the back seat.

We continued to drive and listen and it was soon evident to me that Mokhtar was becoming tired so we stopped at a roadside bus stop for coffee. As we pulled in to the parking lot Barbara and Richard and I were aghast at the tourist buses that were stopped there! Mokhtar never takes us to touristy places so we were hesitant – – until he reminded us that these are Moroccan tourists. Ah! No problem then! We’re fine with Moroccans; just not international tourists. It was a very fun stop because we were able to see so many people in colorful garments eating and socializing before they embarked the bus for faraway places in Morocco. Mokhtar said some of the buses would take 10 hours to reach the destination! And they were packed-full. This stop was notable, too, because people were interested in eavesdropping in on our conversation, I noticed. A few people positioned themselves close by and smiled at some of the things we were laughing and talking about. Also, there were so many cats. So. Many. They were eating the scraps of fish and whatnot people were throwing them and it was quite gross. They were mangy and skinny and feeble. Why I don’t know. They seemed to have unlimited amounts of food at this place from travelers yet still they looked scrawny. I figure they must’ve been sick and steered clear of them at all cost.

It was on the way home that we were stopped by the police again. This time because Barbara and I were not buckled in the backseat; which we didn’t know was a law. It was an annoyance and we felt bad that it happened but we didn’t know. It was also on our way home that we saw the king and his motorcade! It was very exciting for Mokhtar, who has mentioned several times that he’d like to meet the king. Mohammad VI has a good reputation with the people. He is a young king and very active in Moroccan life, with many sightings of him out and about with his children, participating in normal life. Since I don’t know much about him I think I will do some research and will perhaps post something about him here if it seems interesting.

We continued on until we were in Marrakech and looking for our hammam. I will save this for the next blog entry! What an experience the hammam was!